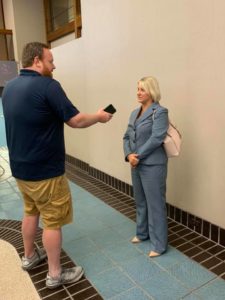 “Victims of crime – especially violent crime – deserve justice but that can only happen if prosecutors do their jobs. Shelby County residents can be rest assured that I have the experience to do this job right and making sure victims get the justice they deserve will be my top priority.”

As Shelby County State’s Attorney, Kroncke will be committed to assisting law enforcement in stopping meth trafficking and to being tough on violent offenders.

Nichole Kroncke currently serves as the First Assistant States Attorney of Macon County where she supervises 15 assistant state’s attorneys and the prosecution of all criminal cases.

Throughout her career, she has prosecuted a total of 77 jury trials, including 64 felonies, 13 attempted murders, 2 quadruple victim reckless homicides, 5 single victim reckless homicides, and 8 sexual assault and/or child sex abuse cases. Kroncke has also prosecuted a total of 16 First Degree Murder cases and one capital case, resulting in a death sentence. She has also supervised the prosecution of more than 50 First Degree Murder cases.